The information of these major tourist spots in Udaipur which are featured in our full day sightseeing tour are given below. 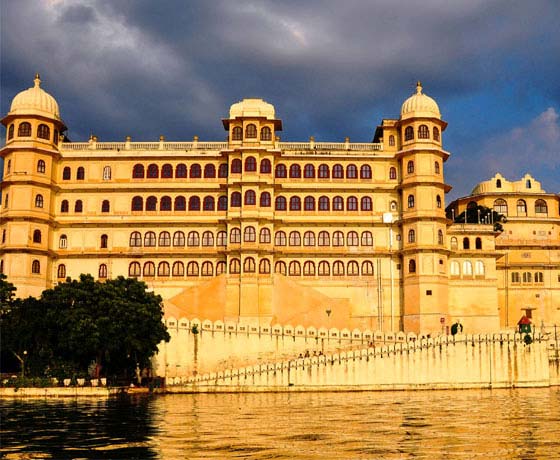 The grand City Palace, towering over the Pichola Lake, is one of the largest palace complex in Rajasthan. The splendid palace, originally built by Maharana Uday Singh II, rises 30 meters above Lake Pichola and extends up to 244 meters. The City Palace has number of small and big palaces, museums and the gardens. 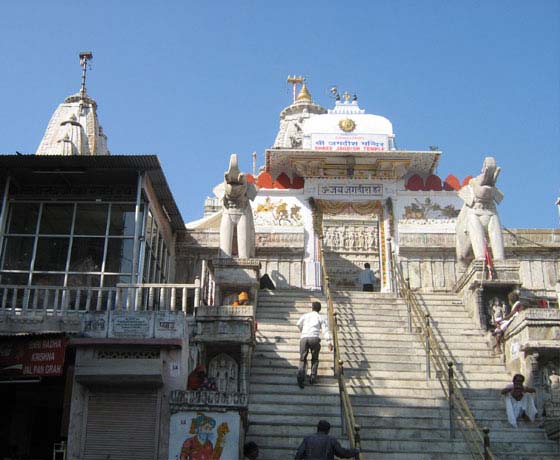 Jagdish Temple is a large Hindu temple in the middle of Udaipur in Rajasthan. A big tourist attraction, the temple was originally called the temple of Jagannath Rai but is now called Jagdish-ji. Located 150m north of the palace in Indo-Aryan architectural style, the temple is dedicated to Lord Vishnu. The temple walls and the shikara or tower are decorated with carvings of Vishnu, scenes from Lord Krishna’s life and figurines of nymphs or apsaras. 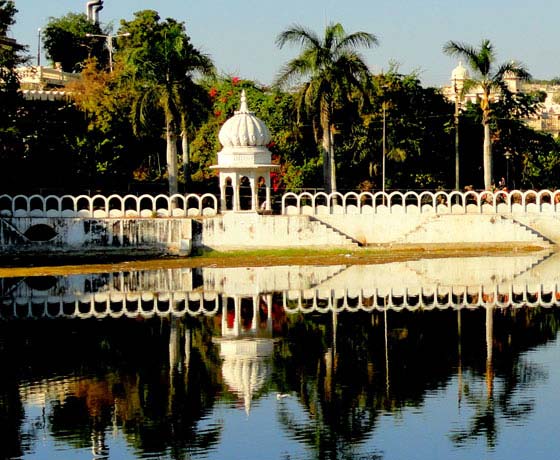 A small lake surrounded with beautiful, structured and precisely manicured garden with fountains and beautiful rocks. A rock and fountain garden and the sunset point from which one can enjoy the sunset view in Lake Pichhola and a panoramic view of the old city. Also one can enjoy the Aerial tramway (rope way) which connects one of the dudh talai gardens to Karni Mata temple. 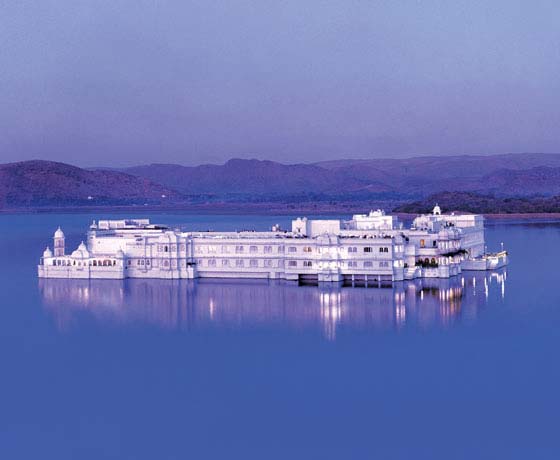 An artificial fresh water lake, created in the year 1362 AD, named after the nearby Picholi village. The lake’s surroundings and the several islands within the lake have been developed over the centuries, with palaces, marble temples, family mansions, and bathing ghats. The famous Lake Palace (now converted into a heritage hotel) is located in the middle of the lake. Two islands, Jag Niwas and Jag Mandir are located within Pichola Lake. 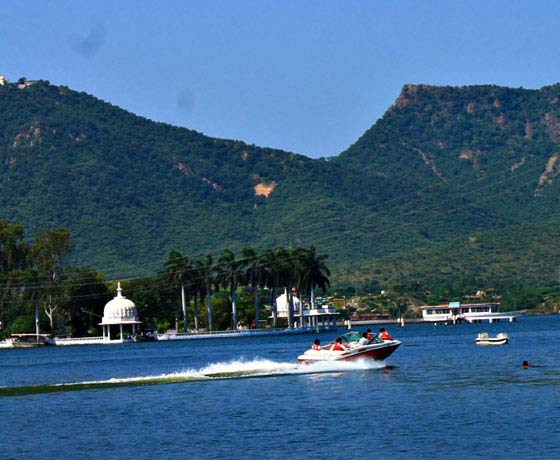 An artificial lake constructed by Maharana in north of Lake Pichola in 1678 and to the north-west of Udaipur. Within the confines of the Fateh Sagar Lake, there are three small islands.; the largest of these is called the Nehru Park, the second island houses a public park with an impressive water-jet fountain and the third island is the address for the Udaipur Solar Observatory. 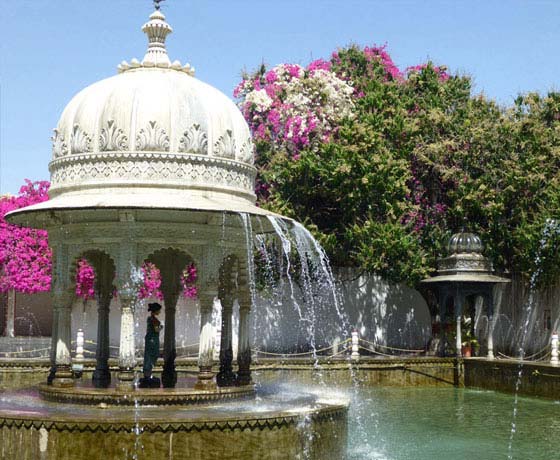 Built by Maharana Bhopal Singh. Saheliyon ki Bari means Garden of the Maids. This garden area lies in northern part of the city and has fountains and kiosks, a lotus pool and marble elephants. Each water channel has its distinct sound and the mingling of these sounds complement the ambience of the place. There is also a small museum here. Sahelion Ki Bari' was laid for a group of forty-eight young women attendants who accompanied a princess to Udaipur as part of her dowry. 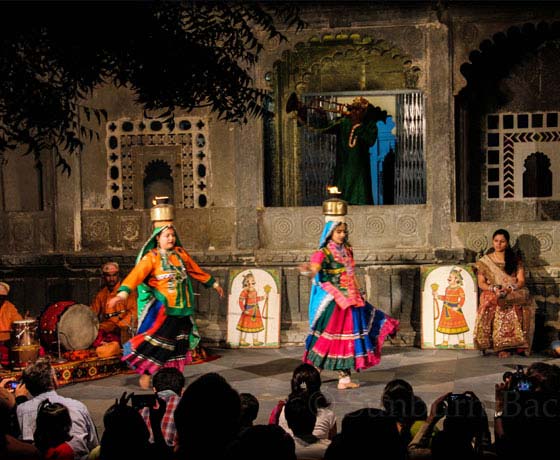 An old building built right on the waterfront of Lake Pichola at Gangori Ghat. The palace has over a hundred rooms, with displays of costumes and modern art. The building has a large and exquisite collection of Mewar painting and glassworks. In the evening, the haveli lightens and stages enjoyable performance of traditional dance and music of Rajasthan. These performances are most sought among the foreigners, and you can find a large gathering in the evening. 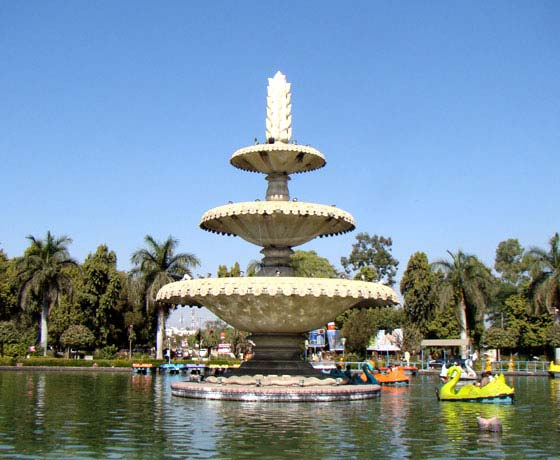 A large roundabout in the city's northern suburb of Panchwati, on the road to Ranakpur and Mt. Abu. centrepiece of the Circle is a large, three-tiered fountain just over 21 m. high, with scalloped dishes surmounted by a wheat-ear motif, representing prosperity. Illuminated at night, it is now a well-known landmark. If you want to experience the evening with locals, this is a place to be. 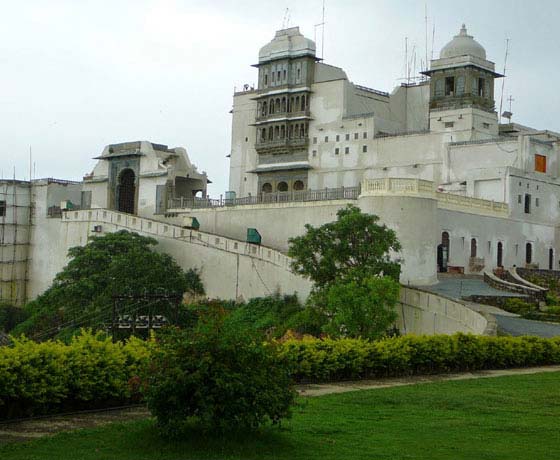 This palace is unique for the purpose for which it was constructed. The palace was built by Sajjan Singh to keep a watch over the monsoon clouds in the surrounding region. Later it was used as a hunting retreat for the royal family. Initially the king had intended to establish a nine storied astronomical center at this spot but his sudden demise shattered his plans.